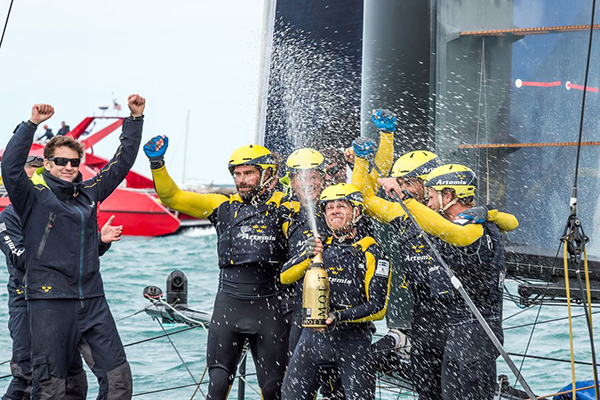 The Swedish team put together its most consistent performance of the series to clinch the event with 61 points, ahead of Land Rover BAR, second with 58.

Another day of racing in front of packed grandstands on the shores of Lake Michigan  the first time America’s Cup racing has been held on freshwater saw Land Rover BAR take the first race of the day.

Artemis Racing then notched their second victory of the weekend in race two, holding off a fierce challenge from Oracle Team USA. The final race of the day was won by SoftBank Team Japan after a slew of penalties to their rivals after the first mark. “I’m a bit relieved,” said Artemis Racing skipper Nathan Outteridge. “We finally had a very good day of weather and our team rose to the occasion.

“We recorded nothing worse than a fourth all week, and we said at the start of the week that finishing top three in every race would be good enough to win, and we did just that.”

“As a team we are happy with second place,” Ainslie said. “We would have liked to have the win, but Artemis Racing sailed very well today.”

Team New Zealand meanwhile held onto the lead in the overall standings after a fourth place finish. “It was sensational racing today and to come away with our overall lead still intact is fantastic,” said skipper Glenn Ashby.

Five challengers are vying for the chance to take on America’s Cup holders Team USA in the America’s Cup final in Bermuda next year.