There have been quite a few games this season where you wondered what Georgetown team was actually even on the court. Tonight, the right Georgetown team showed up to Madison Square Garden to defend their Big East Championship, only to be dispatched in first round by Seton Hall, 57-53 on a last second turn-over.

Aminu Mohammed had 12 points and 10 rebounds for the 11th-seeded Hoyas (6-25). Donald Carey and Collin Holloway both scored 11.

One thing we did see that was different then quite a few of the games this season, an all-around effort in both halves of play. Ewing didn’t have to battle out of a 20 plus point deficit as he has quite a few times this season.

“We made a few mistakes and as all of you know that last one cost us the chance to at least tie the game, said Hoyas Head Coach Patrick Ewing.

Next up for the Hoyas some major decisions about the future of the program. Can Ewing stay under this new contract extension that Georgetown gave him for 3 years. This could be one of the toughest decisions the has had to make since announcing that JTIII had been fired. 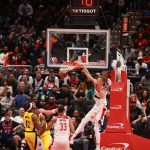