After this latest gaff from the Hoyas Basketball program against American, one who has been scratching their heads and saying, enough is enough, may want to start pulling their hair out.

During the past 24 seasons that we have covered the Hoyas, there have been some great times, but I am not sure these times are it anymore. Excuse after excuse, lack of chemistry… at this point there is simply just no real word to describe what is going on inside of this basketball program.

Primo Spears led three Hoyas in double figures with 15 points with a 7-for-8 performance from the free throw line. Akok Akok followed up with 14 points of his own including three triples to go along with six rebounds, two steals and a pair of assists. Jay Heath rounded out those in double figures with 10 points on 4-of-9 shooting as well as three steals and two assists. These stat lines sound pretty nice right? Perhaps, if you were playing a Big East school, not American University 3 miles across down and two entirely different types of basketball programs.

American University Coach Mike Brennan walked into a media room at Capital One Arena drenched in water Wednesday afternoon after accomplishing a feat that hadn’t been done in four decades. Yes folks, the last time the AU has defeated the Hoyas was long before Ewing put up huge numbers in the Hoyas uniform. Today all he could do is barely hold his head up after Brennan left leaving the blame mostly on the fact that Brandon Murray was out of the line-up.

Everyone who came back from a Jamacia vacation said the Hoyas looked a bit better against La Salle, but how did they look against Loyola Marymount? We can leave that right there.

It’s just plain awful that we have to each year talk about these what-if’s and we will make the changes next game. Okay, that next game is UMBC on Saturday. What does Ewing have in store for us this time? If its a dud in the second half, we will really start to question how long before a real change is made on the Hilltop. Just let Ewing take the money and call it a day while we still have our Hoya pride. 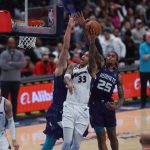 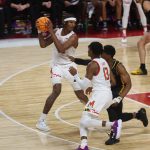