After all of the turmoil that surrounded the Hoyas program last season, a victory tonight in their season opener would be just the start they needed. However, Juan Dixon and his Coppin State squad were not about to make that easy for Ewing and his team, taking them all the way to overtime before getting out run, 16-6 in the overtime period.

Georgetown had every opportunity to close the game out by making two free throw shots in the final 17 seconds of the game, but that was not the case as the missed both shots giving Coppin State a chance to tie the game and send it to overtime.

A long three pointer by Mike Hood off the long rebound saved the game for Coppin State and sent it to overtime tied 83-83.

Georgetown continued to find a way to get the ball to Primo Spears as they did late in the second half. Spears would give the Hoyas the final insurance bucket they needed ballooning the lead to 10 points 99-89. Coppin State would be no factor again the final seconds time.

With the loss tonight, the Eagles dropped to 0-2.  They were led in scoring by Justin Steers, who finished with a career-high 21 points, 12 rebounds and three blocks. Nendah Tarke added 17 points, six rebounds and four steals for Coppin State. In addition, Sam Sessoms had 16 points, 10 assists and four steals.

Next up for the Hoyas is a 11am Saturday match-up against Wisconsin- Green Bay at Capitol One Arena. 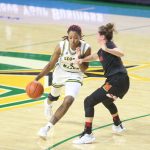 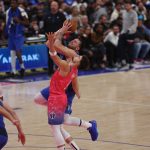