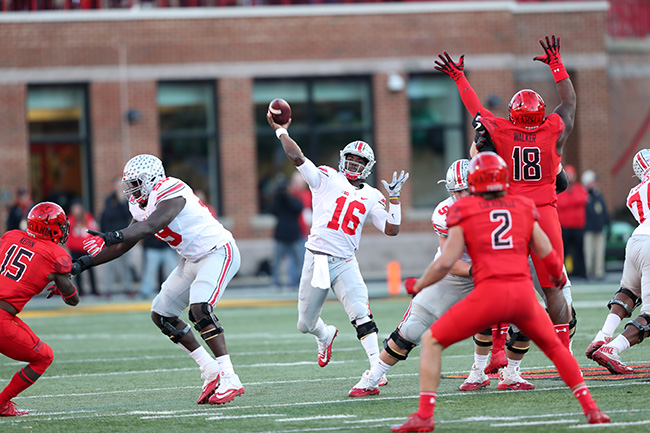 When they talked about a rebuilding season for the Maryland Terps, I am not so sure they envisioned rebuilding their pride at the same time. After suffering a blow out to Michigan last week on the road, returning home Head Coach D.J Durkin had promised that they would give a good effort against Ohio State, well the final score certainly changes that word of effort. How about this team didn’t even show up the entire game.

All Ohio State did the entire game is just ram the ball down Maryland’s throat the entire game and pushed them to the basement for what many yelled was a new rock-bottom for Maryland.

Durkin, frustrated at several reviewed calls the the entire game  could only look on and wonder after Ohio State quarterback J.T. Barrett made it 42-3 with an eight-yard pass to Dontre Wilson just before halftime. By that point, Barrett had more touchdowns (four) than Maryland had rushing yards (two), yards per play (2.1) or points. Barrett finished 18 for 27 for 253 yards and two touchdowns, adding two more scores with his feet as Maryland’s young and depleted defense allowed 581 total yards and 7.3 yards per play.

The quarterback issues continue for the Terps. Again, the revolving door opened today for Durkin. Perry Hills injured his left shoulder on a third-down hit. Hills — who has now been knocked out of four games this season and is questionable again for next week’s game at Nebraska was again, do we dare say again, replaced by senior Caleb Rowe, who finished just 7 for 13 for 97 yards and an interception before being pulled in the second half in favor of freshman Tyrrell Pigrome.

For the Terps this comes as a second week of routs by Big Ten teams and a day that included Durkin announcing less than an hour before kickoff that he had indefinitely suspended three freshmen, running back Lorenzo Harrison, wide receiver DJ Turner and linebacker Antoine Brooks for a violation of the student-athlete code of conduct. Harrison is the team’s second-leading rusher with 633 yards, 57 from breaking the program’s freshman rushing record set by LaMont Jordan in 1997.

So folks, does this make the Randy Edsall era look so bad? Ready for the Fridge to come back? This is surely one of the lowest times the Terps have seen in some years and questioning how can this team not even compete in the Big Ten? This is Maryland we are talking about, they could at least get one  touchdown right? Apparently with their lack of running game and lack of passing, the score is a reflection of what is going on with this program.

So what was the largest defeat in Maryland History? The answer: 76-0 to Navy in 1913. This is the second worst loss in program history and it could have been worse if Urban Myer didn’t use his what may be fifth team by the end of the game. 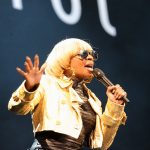