This was exactly the match-up Wizards fans had been waiting weeks for, except it wasn’t exactly the ending they had envisioned.

While everyone could give the credit to the Wizards for a valiant effort to even send this game into overtime, they simply put have to be able to defeat teams like the Raptors if they are going to make a push in the playoffs, especially if this is the team you may eventually face.

Much of the game relied heavily on the play by Kyle Lowry and Lou Williams in the final minutes, who seemed to take matters into their own hands. Lowry hit for 7 of his 23 points in the overtime period and was the difference that the Wizards guards just could not find answers for all night long.

After Paul Pierce’s two free throws gave Washington its first lead of the night, 111-110 with 4:04 left in overtime, the Raptors scored six consecutive points, four by Lowry which set the tone the Wizards could not overcome.

John Wall, battling migraines and a sprained right ankle, was a game-time decision for Washington. He started and led all scorers with 28 points and had 12 assists. Bradley Beal added 26 points.

After the game you could see that Wall appeared a bit fatigued and perhaps needs a few games rest before the All Star break in two weeks.

“The way I’m feeling now, (I’ll) rest and decide what I’m going to do on Monday,” he said. “This was a big game that I wanted to play because I know how much it meant to our team.”

Next up for the Wizards is a match-up against the Hornets, who come into the game with a 20-27 record after knocking off the Denver Nuggets 104-86. 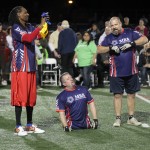 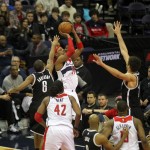