Usually when you let a team battle back from 25 points down, the results by the law of averages usually don’t result in a 10 point victory for teams in the NBA, but the 116-106 victory tonight was a testament to how hard this team played tonight to edge out a solid Pelicans.

“I thought, once again, we’re kind of singing the same song every night. We look at our turnovers and, you know we have 16 for 25 points. It’s hard to beat a team, especially of that caliber if you’re going to turn the ball over 16 times because, you know, some of those times you’re putting the ball in John Wall’s hand and you’re not going to be able to contain him, especially when they’re live turnovers,” said Pelicans Head Coach Alvin Gentry.

For the Wizards, the victory tonight put them back one game over .500 with a couple big games coming up including a Christmas Day game against the Celtics on the road.

The biggest difference in the game tonight for the Wizards, was the help the got from the bench tonight. Mike Scott had his best game in a Wizards uniform with 20 points. He was basically unstoppable in most of the second half.

New Orleans fought their way back into the game thanks to their spectacular big men. Anthony Davis and DeMarcus Cousins spurred an 18-0 run, with 16 points coming at the charity stripe, to get the Pelicans back in the game. They cut the 25 point deficit down to 6 by halftime, and evened up the game at 61 less than two minutes into the third quarter.

However, the Pelicans’ big run gave the Wizards the jolt they needed to get back into gear, as they quickly rattled off a 7-0 run to get back out in front and followed it up later in the quarter with a 12-0 run. The second run established another double-digit lead which they would not relinquish the rest of the way as they finished their homestand on a high note. 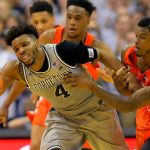